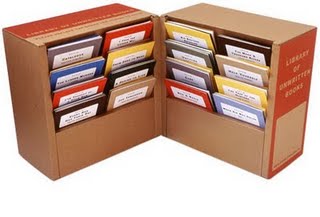 In 1970 Richard Brautigan released his novel The Abortion: An Historical Romance 1966, which featured a library for unpublished books. Whilst an abortion does take place in the book, it is best remembered for the enticing prospect of a library that accepts single copies of books that have just been completed by their authors and that will never in all likelihood be published. The unnamed central character lives in the library with his girlfriend Vida in order to welcome authors at any time of the day or night and give them a chance to lodge their masterpiece.

Sadly Brautigan’s cult faded as the seventies progressed, leading to his eventual spiral into depression, alcohol and ultimately suicide in 1984. The idea of a library for unpublished books persisted though, and was taken up by photographer Todd R. Lockwood in 1990. The Brautigan Library was founded that year in Burlington, Vermont and opened its doors to unpublished manuscripts from around the United States. Much like the original in The Abortion, the library was manned by volunteers and supported by donations. Unlike the fictional library, which was secretly funded by an admiring millionaire, Lockwood’s venture struggled to stay afloat and in 1995 closed its doors. The collection of 325 manuscripts was taken in by the Fletcher Free Library in Burlington, where it remains to this day. Lockwood is still the caretaker of the books, although negotiations are under way for the library to be moved to Vancouver, in Southwestern Washington state.

The curator of online repository Brautigan.net, John F. Barber, is working with Clark County Historical Society Museum to have the library moved to a permanent home in the Andrew Carnegie-designed Museum, which ironically bears a striking resemblance to the San Francisco Public Library on which the fictional library in The Abortion is based. Brautigan was born in Tacoma, a short drive away and published many of his early works just across the Columbia River in Portland. Barber has ambitious plans for the library and considering he is probably the nation’s foremost expert and fan of Brautigan, it seems correct that responsibility for it should fall to him.

As well as re-opening the library to unpublished manuscripts, perhaps more appropriately in digital format, Barber is also considering a National Unpublished Writer’s Day and a Brautigan symposium, with scholars and writers the world over descending on Vancouver for a veritable Brautigan-fest. As the San Francisco Sunday Examiner & Chronicle once famously said, “There is nothing like Richard Brautigan anywhere. Perhaps, when we are very old, people will write ‘Brautigans’, just as we now write novels. This man has invented a genre, a whole new shot, a thing needed, delightful, and right.”

In continuation of my Richard Brautigan celebration week, today I’m looking at The Library of Unwritten Books, an extension of the Library of Unpublished Books seen on yesterday’s blog post. Two British artists, Caroline Jupp and Sam Brown, decided to take the idea one step further when they formed their library of unwritten books project in 1996. Jupp and Brown spent years recording informal conversations about ideas for books with random people in the street, in parks, at festivals and of course, in libraries. Often working with community groups, the homeless, housebound elderly, children excluded from school and on hospital wards, Jupp and Brown transcribed the recordings and converted the dialogues into pamphlet-style books, which were in turn distributed in specially-designed book boxes to community centres, doctor’s waiting rooms, cafés, Laundromats and galleries.

Currently standing at 761 titles, the collection will eventually be housed at The University of West Sussex Mass Observation Archive. This eclectic organisation was started in the 1930s and holds regular surveys on the opinions of ordinary people concerning such matters as what they fed their dog during wartime or their views on cellphones.

Jupp and Brown believe unwritten books are valid literary forms that deserve to be valued, irrespective of their potential worth as a published manuscript. In one interview a boy of seven confessed to hating fruit despite his parents determination he should eat some daily. He was persuaded to take a box of raisins to school every day, which he would duly bring home uneaten and hide in his toy box. After a year his mother discovered the mountain of raisins and he describes how his brother was jumping up and down gleefully shouting, “Make him eat them all now!” He wanted to recount his story for the library of unwritten books because he was ‘living proof that you can live without fruit!’

Richard Brautigan ended his life 25 years ago in 1984. His body was discovered on October 25th.