This review of Deborah Levy’s The Cost of Living appeared in the Irish Times on 7 April 2018, p. 34:

The Price a Woman Has to Pay For Unmaking a Home

The Cost of Living is the second instalment, and future centrepiece, in Deborah Levy’s autobiographical trilogy. Its pivotal nature becomes apparent when the narrator is loaned a shed of her own, where three books — “including the one you are reading now” — will be conceived. Such foregrounding of the work’s primal scene is no metafictional gimmick, however. It is consonant with Levy’s commitment to looking life in the eye, rather than reflected in the shield of allegory.

“It was there,” she explains, “I would begin to write in the first person, using an I that is close to myself and yet is not myself”. Gazing back at her textual avatar – becoming the reader, as well as the author, of herself – Levy opens up this gap through which she journeys towards the “vague destination” of a “freer life”.

There is a deeply moving, albeit somewhat disquieting, passage, where the nine-year-old Deborah, fresh off the boat from her native South Africa, comes knocking on the door of her middle-aged self in London, and ends up watching Bake Off with the two daughters she will later give birth to. This is a variation on the “flashback in the present” technique that the author frequently deploys to great effect in her fiction, but spectacularly fails to get across to a boardroom full of film executives, in one of the book’s many comic scenes.

Describing this ongoing project as a “living biography” is particularly apposite, not only because the author is alive, kicking and evidently at the height of her creative powers, but also because she eschews nostalgia, firmly convinced that the past is never written in stone. Towards the end of the book, she speaks to her mother for the first time since her passing: “She is listening. I am listening. That makes a change”. She goes on to recount a heart-rending anecdote about a pair of earrings she almost buys her as a gift in a department store, before the unspeakable enormity of death suddenly sinks in at the till.

If Things I Don’t Want to Know (2013) was a response to Orwell’s Why I Write, the emphasis here is on how to write in the wake of two traumatic events which occurred within a year of each other: the break-up of the author’s marriage and her mother’s demise. In the Booker-shortlisted Swimming Home (2011), one of the characters claims to only enjoy biographies once the subjects have escaped “from their family and spend the rest of their life getting over them”. Finding herself in a similar situation, the author now seems to be putting into practice all the themes she has been rehearsing in her works since the 1980s, as though the fiction were a prelude to her vita nova.

As Levy downsizes, her life grows bigger and she feels emboldened and energised by the adventure she has embarked upon despite all the hardship. She has no regrets about swapping her book-lined study for a “starry winter night sky”, now that she writes on a tiny balcony, where she falls asleep fully dressed “like a cowgirl”, in her north London “apartment on the hill”. Other people – including the family from down the road that she borrows for Sunday lunches, the Turkish newsagents and the Welsh octogenarian firebrand who kindly lends her the shed – are a constant source of fascination, but so too are the bees, moths, squirrels and birds she shares the world with: “everything,” she observes, “is connected in the ecology of language and living”. She delights in the practicalities of daily life, even proving a dab hand with a Master Plunger, and when she zips along the road on her electric bicycle, her party dress “flying in the wind”, she finds it difficult not to whoop.

The Cost of Living refers to the price a woman has to pay for unmaking the home she no longer feels at home in. In Levy’s case, this radical act of erasure inaugurates a quest for a new life that is inseparable from the writing of a new narrative. No longer willing to take part in the masquerade of femininity – that “societal hallucination” – she fumbles for a different kind of role to play. At this juncture, all she knows is that it will be a “major [as yet] unwritten female character”. The process of transitioning “from one life to another” also prompts her to reinterpret some of her fondest memories and past attitudes: “Did I mock the dreamer in my mother and then insult her for having no dreams?”

Deborah Levy describes women’s often thankless homemaking enterprise as “an act of immense generosity”. It is also a perfect description of this truly joyous book. 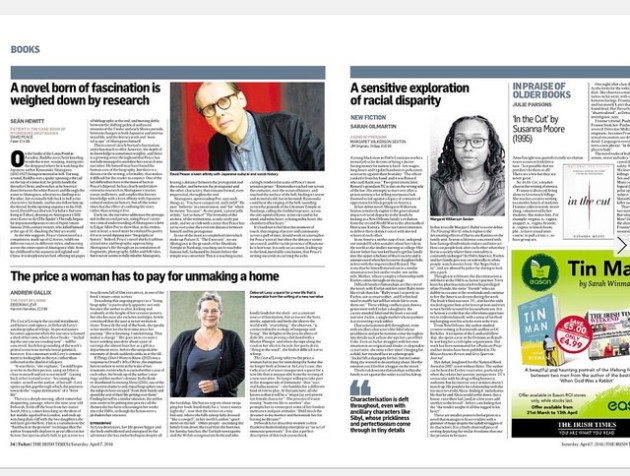 “. . . When Swaantje Güntzel offers us the incongruous spectacle of a cleaning lady diligently vacuuming a field (Staubsauger 2004), she is reminding us that nature produces no waste. This impurity is culture’s privilege, culture’s dirty “sin”, which is that of existence itself. The objective is to express one’s finitude and fear of loss — a loss culture wishes to lose: we seek to get rid of what we produce as it is also the source of our finitude. At the heart of this logic, waste enables us to express the passing of time and the end looming on the horizon; decay and dirt as depletions of life. This is where our contemporary eschatology, linked to environmental disasters, fits in. The more we live, producing ever more waste, the more we pollute the world (an immaculate nature?) where the danger to the environment always comes from culture. It is the border between waste and non-waste that makes our social and cultural condition possible. Waste’s exclusion from culture signals the end of a story that can no longer take place within a cultural context. It must be sacrificed (sacrum) because it is through this process of relinquishment that culture traces the boundary between what is pure and impure. Culture produces waste, which it then excludes. . . .” (original French text by Octave Debary)

Books say no to literature. Some. Others, the majority, say yes. They obey the market or the holy spirit of governments. Or the placid idea of a generation. Or the even more placid idea of a tradition. I prefer books that say no. Sometimes, even, I prefer the books that don’t know what they are saying.

. . . [W]e write only when others haven’t written the book we want to read. That’s why we write one of our own, one that never turns out to be what we wanted it to be. We say no to literature so that literature, for its part, will say no to us. So the book will be, always, a space that we weren’t expecting: a way out, but not the way we were expecting.

‘Not knowing how to write could perhaps be exactly what saves me from literature,’ says Clarice Lispector, again. In the non-fiction chronicles of A Descoberta do Mundo [Discovery of the World], Lispector insists on the desire that her stories not be stories, that her novels not be novels, and not out of any attachment to a forced experimentalism or to the kind of commonplaces that literary workshops return to again and again, with admirable patience: Lispector does not seek to surprise or captivate the reader.