Downstairs was the ongoing story, plot-filled and relentless, of everything she knew; but in her room there was silence, daylight, an absence of structure. By stepping out of the story she had come upon the emptiness that lay all around it.

Human culture is intergenerational continuity (made up of what Stiegler calls “tertiary retentions” — the technical storage and transmission of collective memories). The long threads that compose our group, and the individual identities from which they are woven, start to fray and wear away. As one commentator, Andrew Gallix, put it, “We live in an age of total recall and rampant dementia.” 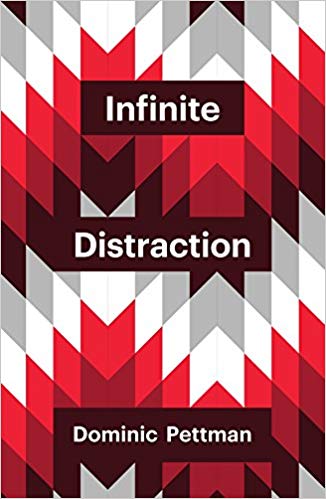 Art, turning the amplifiers up. Listen, man, just listen, he says.
A kind of buzzing. A hum, almost sublminal. Hissing and crackling. Popping. The feeling of forces gathering. Of something about to begin …
Doesn’t it sound cool? Art asks. Have you ever heard anything more exciting?
We’re only going to ruin it by actually playing something, I say.
We should play this, Art says, pressing his ear to the speaker cone. Play all this potential … Like, what we could play, rather than anything we actually play. 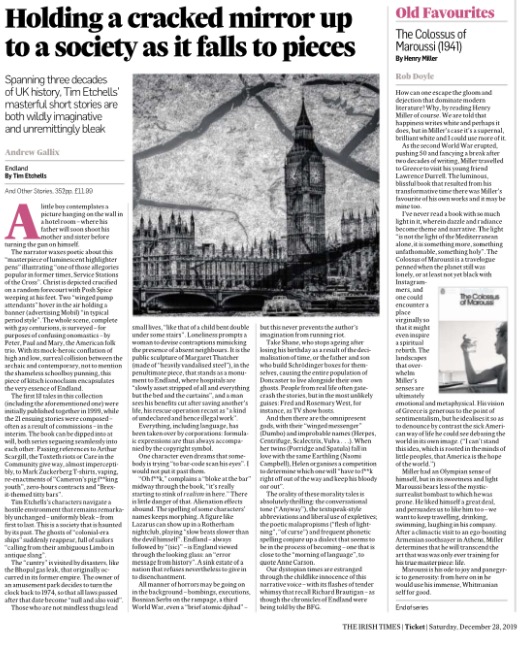 A little boy contemplates a picture hanging on the wall in a hotel room — where his father will soon shoot his mother and sister before turning the gun on himself. The narrator waxes poetic about this “masterpiece of luminescent highlighter pens” illustrating “one of those allegories popular in former times, Service Stations of the Cross”. Christ is depicted crucified on a random forecourt with Posh Spice weeping at his feet. Two “winged pump attendants” hover in the air holding a banner (advertising Mobil) “in typical period style”. The whole scene, complete with gay centurions, is surveyed — for purposes of confusing onomastics — by Peter, Paul and Mary, the American folk trio. With its mock-heroic conflation of high and low, surreal collision between the archaic and contemporary, not to mention the shameless schoolboy punning, this piece of kitsch iconoclasm encapsulates the very essence of Endland.

The first 18 tales in this collection (including the aforementioned one) were initially published together in 1999, while the 21 ensuing stories were composed — often as a result of commissions — in the interim. The book can be dipped into at will, both series segueing seamlessly into each other. Passing references to Arthur Scargill, the Toxteth riots or Care in the Community give way, almost imperceptibly, to Mark Zuckerberg T-shirts, vaping, re-enactments of “Cameron’s pig fucking youth”, zero-hours contracts and “Brexit-themed titty bars”.

Tim Etchells’ characters navigate a hostile environment that remains remarkably unchanged — uniformly bleak — from first to last. This is a society that is haunted by its past. The ghosts of “colonial-era ships” suddenly reappear, full of sailors “calling from their ambiguous Limbo in antique slang”. The “cuntry” is visited by disasters, like the Bhopal gas leak, that originally occurred in its former empire. The owner of an amusement park decides to turn the clock back to 1974, so that all laws passed after that date become “null and also void”. Those who are not mindless thugs lead small lives, “like that of a child bent double under some stairs”. Loneliness prompts a woman to devise contraptions mimicking the presence of absent neighbours. It is the public sculpture of Margaret Thatcher (made of “heavily vandalised steel”), in the penultimate piece, that stands as a monument to Endland, where hospitals are “slowly asset stripped of all and everything but the bed and the curtains”, and a man sees his benefits cut after saving another’s life, his rescue operation recast as “a kind of undeclared and hence illegal work”. Everything, including language, has been taken over by corporations: formulaic expressions are thus always accompanied by the copyright symbol. One character even dreams that somebody is trying “to bar-code scan his eyes”. I would not put it past them.

“Oh fuck,” complains a “bloke at the bar” midway through the book, “it’s really starting to stink of realism in here.” There is little danger of that. Alienation effects abound. The spelling of some characters’ names keeps morphing. A figure like Lazarus can show up in a Rotherham nightclub, playing “slow beats slower than the devil himself”. Endland — always followed by “(sic)” — is England viewed through the looking glass: an “error message from history”. A sink estate of a nation that refuses nevertheless to give in to disenchantment. All manner of horrors may be going on in the background — bombings, executions, Bosnian Serbs on the rampage, a Third World War, even a “brief atomic djihad” — but this never prevents the author’s imagination from running riot. Take Shane, who stops ageing after losing his birthday as a result of the decimalisation of time, or the father and son who build Schrödinger boxes for themselves, causing the entire population of Doncaster to live alongside their own ghosts. People from real life often gatecrash the stories, but in the most unlikely guises: Fred and Rosemary West, for instance, as TV show hosts. And then there are the omnipresent gods, with their “winged messenger” (Dumbo) and improbable names (Herpes, Centrifuge, Scalectrix, Vulva…). When her twins (Porridge and Spatula) fall in love with the same Earthling (Naomi Campbell), Helen organises a competition to determine which one will “have to fuck right off out of the way and keep his bloody oar out”.

The orality of these morality tales is absolutely thrilling: the conversational tone (“Anyway”), the textspeak-style abbreviations and liberal use of expletives; the poetic malapropisms (“flesh of lightning”, “of curse”) and frequent phonetic spelling conjure up up a dialect that seems to be in the process of becoming — one that is close to the “morning of language”, to quote Anne Carson. Our dystopian times are estranged through the childlike innocence of this narrative voice — with its flashes of tender whimsy that recall Richard Brautigan — as though the chronicles of Endland were being told by the BFG. 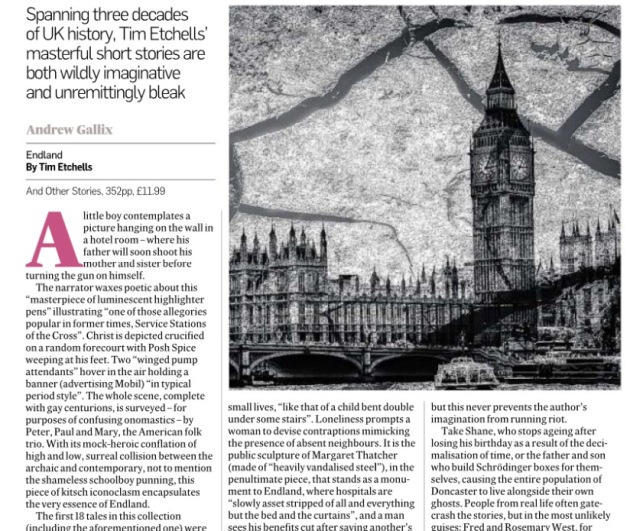 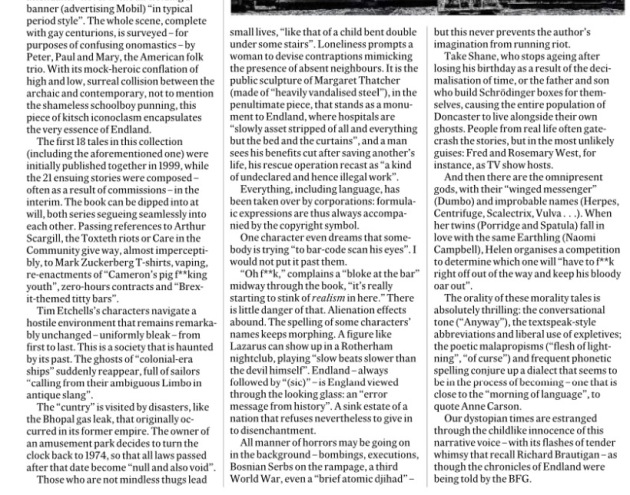