Ralph Rugoff, “The 10 Best…Invisble Artworks,” The Observer 10 June 2012 (The New Review, p. 6)
From an infrared labyrinth to a cursed ball of air

Hein transformed the empty space of an art gallery into Invisible Labyrinth, using infrared technology in an ingenious fashion. Hein’s artwork provides visitors with a pair of digital headphones that vibrate whenever they knock into one of the invisible walls of a maze. While it is deeply engaging to enter one of the work’s seven labyrinths, it is also fascinating to observe the uncanny spectacle of gallery-goers navigating indeterminable routes.

Before creating his colossal monuments to things like clothes pegs and matches, Oldenburg proposed various memorials. His Proposed Underground Memorial and Tomb for President John F Kennedy called for a huge, hollow casting, based on a photograph of the assassinated president, to be buried head-down in the ground. The statue’s size was identical to that of the Statue of Liberty, as if to suggest that Kennedy’s murder had turned the American dream on its head. Two decades after his proposal, the idea of evoking tragedy through absence became a major feature of commemorative projects for the Holocaust and civil violence. 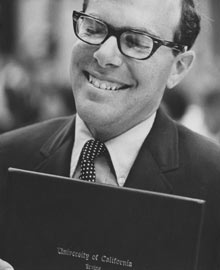 Yves Klein’s Utopian plans for creating an architecture de l’air were cut short by his premature death in 1962. Taking a less grandiose approach to building with air, Asher used industrial blowers to create “walls”, “curtains”, and “columns” of accelerated air. He would place them in relation to architectural features in a gallery. Visitors would perceive a gentle and unexpected flow of air when walking through the exhibition space which would subtly alter their usual journey.

Over the past 50 years, a number of artists have developed furtive approaches to staging exhibitions. The most brilliant example was by African-American artist David Hammons, who held an untitled and unadvertised show in a New York shop that sold African and Asian artifacts. Not only were Hammons’s unlabelled sculptures displayed side by side with the traditional merchandise, but many of his pieces incorporated items from the shop. Playing with boundary issues and cultural camouflage, his artworks achieved their invisibility not by forgoing material form, but by immersing themselves amid the world’s cornucopia of things.

For the past three decades, Ilya and Emilia Kabakov have specialised in making “total installations”, many of which reimagine life in the former Soviet Union with a dark sense of absurdity. Their 2004 installation, The Empty Museum, replicates a room in a classical gallery, featuring a Bach soundtrack and deep red walls that are dramatically spot-lit. But where we might expect to find paintings on the walls, there are only pools of light. What has happened to the art? Haunted by absence, the Kabakovs’ eerily theatrical installation invites us to write our own script.

Warhol produced a few “pornographic” paintings in the mid-1960s using fluorescent inks that were only visible under ultraviolet light. Along with his film Blow Job (which shows only the face of a man on the receiving end of the eponymous sex act), his invisible canvases were provocations aimed at the harsh anti-pornography laws of the time, which tightly controlled what could or could not be seen. His interest in invisible media would pop up at several times in his career as if he were seeking an antidote to his own overexposure as a celebrity.

In 1992, Friedman created Untitled (A Curse), which appears to be nothing more than a pedestal. But he had employed a professional witch to cast a curse on an 11-inch sphere, resting 11 inches over the pedestal. At the time he said he was thinking about “how one’s knowledge of the history behind something affects one’s thinking about that thing”. And once you read how it was made, Friedman’s pedestal becomes a loaded object that tests the roles that belief and imagination play in our encounters with art.

In the late 1960s, Barry began producing artworks using a range of immaterial media, including electromagnetism, radio waves and ultrasonic sound — forms of energy that, as he noted, “exist outside the narrow arbitrary limits of our own senses”. His Radiation Piece has a tiny amount of caesium-137, a radioactive isotope released into the atmosphere during nuclear tests and accidents. It has a “half life” of 30 years, but continues emitting energy forever (although in ever-decreasing quantities). For Barry, who found ideas of nothingness and the void to be extremely potent, radiation was a means of evoking something immeasurable and without limit — the sublime realm of the unseen.

9 The Specialization of Sensibility in the Raw Material State into Stabilized Pictorial Sensibility
Yves Klein, 1958

In the history of invisible art, perhaps the most visible landmark remains Yves Klein’s 1958 exhibition at Galerie Iris Clert in Paris, The Specialization of Sensibility in the Raw Material State into Stabilized Pictorial Sensibility — an empty gallery, apart from a single cabinet, in which every surface had been painted white. Klein maintained that the space was saturated with a force field so tangible that some people were unable to enter the exhibition “as if an invisible wall prevented them”. Others may have been unable to enter because spectacular press coverage ensured huge queues of spectators searching for something to look at.

Swiss artist Jakob has devised several different means of making “invisible paintings”: painting on paper or canvas using water rather than pigment or exposing a lightly primed canvas — as if it were a psychically sensitive type of photographic paper — to the presence of a person or animal in order to capture some ethereal aspect of their existence. This photograph of the artist holding up a blank canvas towards a horse might seem like an absurd gag, yet at the same time it earnestly conjures an unseen connection between man and animal that no straightforward portrait could convey.

I accidentally scared a gallery technician witless while exploring the Hayward Gallery’s exhibition of invisible art. I was standing in a room of thick, velvety darkness. A technician pushed through the black curtains and became aware of someone else in the gloom. Apparently spooked, he asked: “Who’s that?”

It was a relief to see someone else scared, because The Ghost of James Lee Byars already had me seriously unnerved. This work of art consists of no more than its six-word title and a darkened room. Yet its atmosphere is palpable. Six words are enough to tell a hell of a ghost story, it turns out.

Eventually, in reality, he died in Cairo in 1997. Judging by the terror it can inflict on Hayward contractors, I would guess the invisible image of Byars is creating quite a folklore behind the scenes.

Or perhaps they are dreading the critics. What, eight quid for a gallery full of invisible paintings? This exhibition courts tabloid headlines and bluff empirical sarcasm. It is, like Jerry Seinfeld’s sitcom, a show about nothing. But it succeeds because it is in on the joke, which it makes unexpectedly profound. Quite frankly, there is more art here, despite it being invisible, than in a lot of stuff galleries lure us to see.

There are indeed some invisible paintings in the show, white surfaces marked with materials that include “Brainwaves” by the Swiss artist Bruno Jakob. There is a drawing that fills a huge gallery and yet is almost impossible to find since the Taiwanese artist Lai Chih-Sheng has traced all the lines along floor tiles, corners of walls and fittings to make a drawing that is a near-invisible web-like echo of the place.

Yet the real heart of the exhibition is not so much in works that are barely there as in the thing they allude to, the unseen itself. As you put on a surreal buzzing headpiece to negotiate Jeppe Hein’s invisible maze or speculate on which gallery-goer may be the actor hired by Bethan Huws to behave just like a visitor, the notion of a world beyond appearances takes on a strange and powerful reality.

This exhibition is a seriously brilliant jest. It is a genuine history of an idea in art, a fascination with the immaterial and imperceivable that can be traced back to the audacious claims of Yves Klein in late 1950s Paris to create invisible atmospheres and “air architecture”, most famously in his 1958 exhibition of nothing, The Void. But it is also an absurd story. Carsten Holler exhibits an invisible car, one of a field of futuristic vehicles he designed for a utopian race. There is its starting place, painted on the gallery floor. But the supercar, called The Invisible, is for you to imagine.

The magic of the exhibition, its bizarre inversion of gallery-going, is that you do indeed imagine it. The car seems to be there. You don’t step on its starting block, in case you scratch the unseen paintwork.

Nearby is an empty white plinth. The air above it is cursed. The artist Tom Friedman got a witch to curse a zone hovering above the pedestal. As soon as you know this you do not want to put your hand into that evil space.

Why? Because nothing demands something of us. The human mind fills blanks with images and ideas; that is what a ghost story is, a way of filling darkness. This exhibition reveals that when artists, from Klein to Chris Burden, who hid himself on an elevated shelf in a gallery in 1975, started to deny that art had to be seen, they opened up a theatre for the imagination.

In the Hayward Gallery, the ghost of Byars haunts The Ghost of James Lee Byars. The visible world, as Plato pointed out, is a veil concealing truth.

Invisible Art brings together works from the past half century that explore ideas related to the invisible and the hidden. The exhibition includes work by some of the most important artists of our time as well as younger artists who have expanded on their legacy.

From the amusing to the philosophical, there are works you can observe and others you can take part in, such as Jeppe Hein’s Invisible Labyrinth. From Yves Klein’s utopian plans for an ‘architecture of air’ to Robert Barry’s Energy Field (AM 130 KHz) from 1968 — which encourages a heightened awareness of the physical context of the gallery — this exhibition spans diverse aesthetic practices and concerns.

Many of the works in Invisible seek to direct our attention towards the unwritten rules and conventions that shape our understanding of art. Other works invoke invisibility to underscore the limits of our perceptual capacities or to emphasize the role of our imagination in responding to works of art. Some use invisibility as a metaphor that relates to the suppression of information or the political disappearance and marginalization of social groups.