This appeared on the Guardian Music Blog on 9 December 2009: 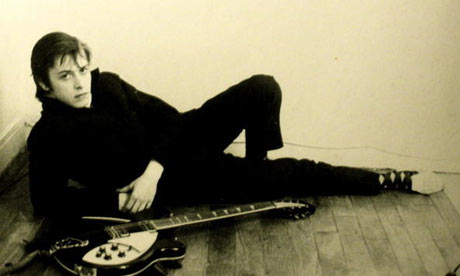 “Denis Denis, oh with your eyes so blue/Denis Denis, I’ve got a crush on you.” So sang Debbie Harry on Blondie’s first European hit in 1978. At the time, there were persistent rumours that the Denis in question was none other than Denis Quilliard — better known as Jacno — who died from cancer at the age of 52 last month. After embodying the post-punk years in France, Jacno (his soubriquet, which he acquired as a chain-smoking teenager, was a tribute to the graphic designer who created the iconic Gauloises cigarettes logo) had himself achieved cult status.

Despite being at the heart of the original Parisian punk scene, Jacno hated the herd mentality associated with such movements. One of his more recent songs is called “Je viens d’ailleurs” — “I Come from Elsewhere” — and in his book of interviews, he repeatedly refers to himself as a “martian” (which is quite fitting given his resemblance to Bowie circa The Man Who Fell to Earth).

Jacno met the beautiful Uruguayan Elli Medeiros (now Mme Brian de Palma) during a student demonstration in 1973. They became an item and formed the Stinky Toys (a reference to both Dinky Toys and New York Dolls). Following their first chaotic gig in 1976, the band acquired a reputation for debauched drunkenness that eventually alienated EMI who were about to sign them.

At Malcolm McLaren‘s behest, they played the 100 Club punk festival following which Elli appeared on the cover of Melody Maker. Their eponymous first album sold — as Jacno used to point out — as many copies as the Velvet Underground’s debut. And like the Velvets, their small fanbase included such luminaries as Andy Warhol. When he arrived at Orly airport in the summer of 1977 — having been invited to attend the inauguration of the Pompidou Centre — the Pope of Pop was sporting a conspicuous Jacno badge. Over the following days, Warhol would court the young musician assiduously (albeit unsuccessfully), famously painting his portrait on a restaurant tablecloth using a borrowed make-up kit.

On their second album, the Toys abandoned their original riff-heavy sound and explored colder, quirkier climes. The band disbanded after an Altamont-style gig during which a fan was killed by rampaging Hells Angels. It was time to move on.

In 1980 Jacno became the poster boy for the Jeunes Gens Modernes (“Modern Young Things”), a label coined by a local magazine to describe the resolutely elitist post-punk scene based around Le Rose Bonbon nightclub. He provided the soundtrack to Olivier Assayas‘s first short movie, including an instrumental entitled “Rectangle“, which no record company would release at first, although it ended up being a massive hit throughout Europe. The film also included a bittersweet track sung by Elli that marked the birth of the Elli & Jacno duo which would go on to sell millions of records until the couple split up in 1984.

Jacno also produced albums by some of France’s greatest stars like Jacques Higelin or Etienne Daho, but he will go down in history as a pioneer of electropop who anticipated the late 1990s French Touch. By playing schmaltzy 1960s “yéyé” tunes on Kraftwerk-style synthesisers, Jacno provided a perfect retro-futurist soundtrack to the melancholy innocence of adolescence. Paris will never be quite the same without him.