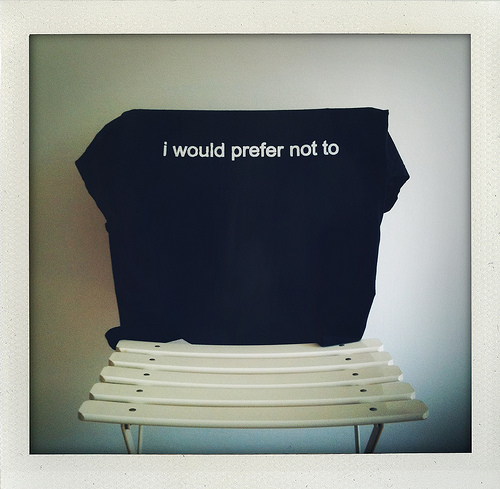 …Which brings me to the second way of understanding the whole document: as a much rawer and more fragmented reflection on the act of writing itself, the excruciating difficulty of carrying the practice forward — properly and rigorously forward — in an age of data saturation. The Jesuit presents “the world and reality as already essentially penetrated and formed, the real world’s constituent info generated . . . now a meaningful choice lay in herding, corralling and organizing that torrential flow of info.” He could just as well be describing the task of the novelist, who, of course, is also “called to account.” It’s hard not to see in the poor pencil-pushers huddled at their desks an image of the writer — nor, given Wallace’s untimely end, to shudder when they contemplate suicide.

Lost childhood pools, by this reading, would constitute a kind of pastoral mode cached (or trashed) within the postmodern “systems” novel — which, in turn, is what the systems-within-systems I.R.S. really stands for. The issues of emotion and agency remain central, but are incorporated into a larger argument about the possibility or otherwise of these things within contemporary fiction. The data-psychic character Sylvanshine can glean trivia about anyone simply by looking at him, but is “weak or defective in the area of will.” Nor, due to endless digressions, can he complete anything. No one can; in “The Pale King,” nothing ever fully happens. That this is to a large extent a metaphor (for the novel in general, or this novel in particular) becomes glaringly obvious when we hear one unnamed character describe the play he’s writing, in which a character sits at a desk, doing nothing; after the audience has left, he will do something — what that “something” is, though, the play’s author hasn’t worked out yet. […]

…Wallace’s writing is haunted by modernism’s (very plural) legacy. One of the nicknames for the David Wallace character in “The Pale King” is “the young man carbuncular,” a moniker straight from Eliot’s “Waste Land.” Kafka’s “Castle” is explicitly invoked; and so, implicitly by the unfinished clerk-at-desk play, is the entirety of Beckett’s drama.

But there’s an older ghost haunting “The Pale King” even more, I think, one whose spectral presence combines both the political and metafictional ways of reading the book: Melville’s Bartleby, the meek and lowly copyist who cannot will himself to complete the act of copying — or, to put it another way, the writer who cannot will himself to complete the act of writing. In effect, all the I.R.S.’s clerical serfs are Bartlebys; through them, and through this book, he emerges as the melancholy impasse out of which the American novel has yet to work its way. America’s greatest writer, the author of “Moby-Dick,” spent his final 19 years as a customs officer — that is, a tax inspector. To research “The Pale King,” Wallace trained in accounting. We’re moving beyond haunting to possession here. Bartleby, of course, ends up dead, leaving a stack of undeliverable papers. This is the inheritance that Wallace earnestly, and perhaps fatally, grappled with. The outcome was as brilliant as it was sad — and the battle is the right one to engage in.