This review of David Caron‘s AIDS in French Culture: Social Ills, Literary Cures (University of Wisconsin Press, 2001) appeared in the inaugural issue of the Hyde Park Review of Books (winter 2002):

David Caron weaves literary criticism, cultural history and gay studies into a brilliant, sometimes dazzling, examination of “AIDS in French Culture.” The importance of his book is beyond doubt — given the extent of the AIDS pandemic in France — but one cannot help feeling that the whole is somehow less than the sum of its parts. Paradoxically enough, for one whose purpose is to dispel the preposterous idea that AIDS appeared to fulfill a purpose, Caron imposes an overarching, teleo(il)logical narrative thread upon what is essentially an episodic structure. Each chapter is a little island of Flaubertian self-containment in which the author introduces regular recaps and pointers to give a semblance of continuity or direction. As a result, the conclusion (where the author belatedly develops his ‘central’ thesis) seems tagged on to a collection of related articles. If the weaving is a little décousu, however, it is mainly because AIDS in French Culture is much more than just another polemical tract.

The author’s premise is that France’s inability to cope with AIDS in an effective manner has been largely due to intellectual muddle. He argues convincingly that the AIDS debate of the 1980s was couched in terms dating back to the Third Republic. The young regime’s blissfully optimistic religion of science was mirrored, in Jekyll and Hyde fashion, by a pathological fin-de-siècle fear of degeneration. Caron analyses skillfully how these forces of unreason were recast as rational discourse to absurd yet devastating effect. The newly-medicalized figure of the male homosexual became the first scapegoat of this “evil side of progress,” before the rise of an unprecedented wave of anti-Semitism.

In a catch-22 situation reminiscent of the mad, circular logic of Joe Orton’s psychiatrist in What the Butler Saw, homosexuals were accused of being both the cause and the consequence of national decadence. In short, they were guilty of being victims: “The homosexual found himself twice determined, and was held responsible for a disorder of which he was also an outcome.” The author tracks down such pseudoscientific postures or impostures from Zola’s attempt to model literature on a medical discourse which itself was “structured by metaphors” to the AIDS epidemic which was simultaneously explained through supposedly-meaningful metaphors and used as a trope “for the collapse of moral values.” Close reading is clearly Caron’s forte and his studies of Zola and Genet offer invaluable insights into the authors’ works. The chapter devoted to Hervé Guibert’s literary détournement of contamination — “the principle governing metaphors” — which enabled the novelist to reclaim infection “not only as a destructive but as a productive process” is a tour de force.

Above all, Caron counters the misconception according to which we are equal in front of the disease: “If, biologically speaking, anybody can get AIDS, not everybody will.” This “humanist cant” is prevalent in France where the “founding narrative of universal equality” has been applied to HIV “as if the virus were to abide by the ‘Declaration of the Rights of Man and the Citizen.'” By refusing to recognize the existence of a gay community, the “French model of republican integration” has been partly responsible for “the deaths of tens of thousands of people.” One can only hope that a French translation will follow shortly. As a form of public service. 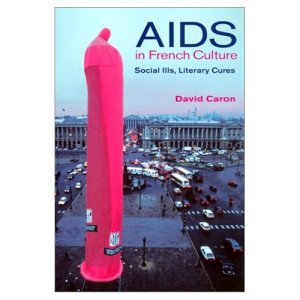