This appeared in Guardian Books on 8 February 2010:

Nearly 50 years on, René Girard’s theory remains a powerfully illuminating insight into both literature and the world 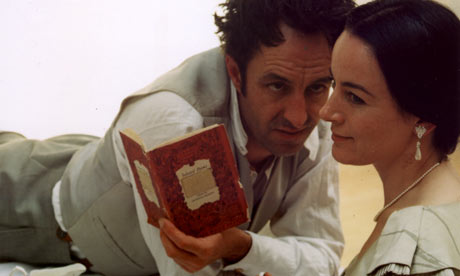 Many thanks for your insightful comments on “The Death of the Author” and interesting suggestions concerning future discussion topics — please keep them coming. All this feedback confirms the utility of a debate on the purpose of literary theory at a time when critics have all too often retreated into academia or become appendages of publishers’ marketing departments. Talented critics can do so much more than just test-drive the latest products for consumers. They can shape the zeitgeist, renew our perception of great literary works and even help authors make sense of their own worlds — a hat-trick René Girard pulled off with Deceit, Desire and the Novel.

Discovering Deceit, Desire and the Novel is like putting on a pair of glasses and seeing the world come into focus. At its heart is an idea so simple, and yet so fundamental, that it seems incredible that no one had articulated it before. Girard’s premise is the Romantic myth of “divine autonomy”, according to which our desires are freely chosen expressions of our individuality. Don Quixote, for instance, aspires to a chivalric lifestyle. Nothing seems more straightforward but, besides the subject (Don Quixote) and object (chivalry), Girard highlights the vital presence of a model he calls the mediator (Amadis of Gaul in this instance). Don Quixote wants to lead the life of a knight errant because he has read the romances of Amadis of Gaul: far from being spontaneous, his desire stems from, and is mediated through, a third party. Metaphysical desire — as opposed to simple needs or appetites — is triangular, not linear. You can always trust a Frenchman to view the world as a ménage à trois.

Mediation is said to be external when the distance between subject and mediator is so great that never the twain shall meet. This is the case of Don Quixote and Amadis, or Emma Bovary and the fashionable Parisian circles she dreams of. Here, the derivative nature of desire is clearly acknowledged. The hero of external mediation “worships his model openly and declares himself his disciple”. When mediation is internal, however, the distance between subject and mediator is small enough to give rise to rivalry between the two. The mediator, who aroused desire for the object in the first place, comes to be seen as an obstacle to the fulfilment of this very desire: “the model shows his disciple the gate of paradise and forbids him to enter with one and the same gesture”. Although now ostensibly a figure of hatred, the mediator continues to be idolised subterraneously or even subconsciously. In Proust‘s In Search of Lost Time, for instance, the Guermantes remain Mme Verdurin’s sworn enemies until the day when she marries into this family she had in fact secretly admired and envied all along.

Girard’s contention is that the need for transcendence has survived the decline of Christianity, resulting in the ersatz “inverted transcendence” of mimetic desire. The spread of this highly-contagious “ontological disease” gathers momentum in the works of Stendhal before reaching pandemic proportions in Proust and Dostoyevsky. Whereas Don Quixote is an “upside-down hero in a right-side-up world,” Julien Sorel (The Red and the Black) is a “right-side-up hero” in a topsy-turvy world. By the time we reach Dostoyevsky (Notes From the Underground, The Possessed), everything has gone awry. All these novels illustrate how internal mediation “triumphs in a universe where the differences between men are gradually erased”. The more egalitarian a society, the closer the mediator and the greater the rivalry.

In Stendhal’s worldview, there once was a golden age when the nobility’s social status was correlated with its nobility of spirit. Passion and spontaneity, which used to be the hallmarks of the true nobleman, have all but disappeared from The Red and the Black, giving way to abject vanity. After the French Revolution, it is no longer possible for the nobility to simply be: it must now justify its privileges in the eyes of “the Other”. In so doing, it becomes ignoble. The aristocrat mimics the bourgeois who mimics the aristocrat. At the level of individuals, this double mediation is a delicate balancing act in which the loser is the one who can no longer conceal his desire for the other, from the other. This revelation acts as an instant passion killer, since it shatters the illusion of “divine autonomy” that had proved so compelling. Open rejection, in turn, makes the heart of the spurned lover grow ever fonder.

Masochism — which features so prominently in both Proust and Dostoyevsky — is a by-product of the increasing proximity of the mediator; a means of enhancing his supposed divinity. The greater the obstacle he represents, the greater his divinity. Girard explains that we become masochists as soon as “we no longer choose our mediator because of the admiration which he inspires in us but because of the disgust we seem to inspire in him”. As the “ontological sickness” progresses, the desired object is increasingly forgotten — it virtually disappears in Dostoyevsky — to be replaced by the mediator. The masochist desires the obstacle which signals the divine presence of the mediator. In the same way, the Proustian snob puts up purely abstract barriers between himself and an object that is so ineffable it barely exists at all. This disappearance of the object is of no real consequence since it “loses its value in the very act of being possessed” anyway.

Writers themselves are not immune to mimetic desire. The release of a book is an “appeal to the public” which is frequently experienced as an affront to authorial pride. Aristocratic writers used to keep up appearances by claiming that they never intended their works to be printed. La Rochefoucauld even went as far as to claim that his manuscript had been stolen by a servant. The modern writer has no servants, so he makes “an anti-appeal to the public in the shape of anti-poetry, anti-novel, or anti-play. The main thing is to make the Other taste the rare, ineffable, and fresh quality of one’s scorn for him”. Sound familiar?

With Deceit, Desire and the Novel, René Girard wanted to demonstrate that the truly “great novelists reveal the imitative nature of desire” in their works. In the process, he reinterpreted some of the most important novels ever written, launched a devastating broadside against the inheritors of Romantic individualism and spawned a whole new sub-genre — mimetic theory — which has been applied to almost everything, from psychology to economics. Were it not for this brilliant debut, published in France back in 1961, incidentally, Facebook may have remained the plaything of a handful of Harvard geeks.

Peter Thiel — a venture capitalist whose mentor at Stanford was none other than Girard lui-même — soon spotted the commercial potential of a social networking site based on mimetic desire. In fact, the whole concept of viral, word-of-mouth marketing follows Girard’s principle according to which the strongest desires are those influenced by an admired third party. The gods haven’t withdrawn: they have gone online and their name is Legion. What the venerable Académicien makes of this exploitation of an “ontological disease” he has been denouncing for half a century is anyone’s guess.