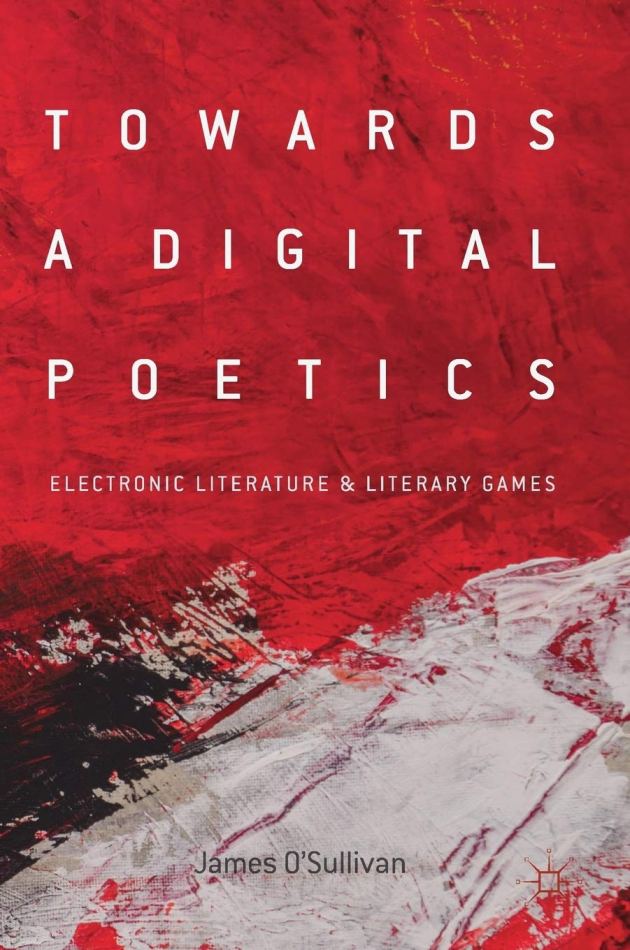 “Perhaps e-lit is already dead?” Andrew Gallix once mused (2008). Central to Gallix’s succint and useful account of the field is the idea that electronic literature has been “subsumed into the art world or relegated to the academic margins”, a proposition that I found time to reject the best part of a decade later: in the works of practitioners like Mez Breeze, Andy Campbell, Dan Pinchbeck and his studio, The Chinese Room, we see that electronic literature is finally having its contemporary moment, and that it does have a measure of popular appeal (O’Sullivan 2017) [p.11].

But Gallix has a point, nonetheless, and the great divide has renewed significance [p. 12].

[PS My claim was not that literary quality was being compromised, but that the most interesting examples of digital literature — or so it seemed to me at the time — were morphing into something that was no longer literature at all. This was not a criticism on my part.]

Almost a decade has passed since 3:AM Magazine founder Andrew Gallix, writing in the Guardian, proclaimed the imminent death of electronic literature, that is, literature with an inherently computational aesthetic. There was some merit to Gallix’s argument, his concern being that the form’s emphasis on multi-modality was such that the word would eventually get lost. In many instances — say, where play is accentuated — this has indeed been the case. But today, for every work of e-lit that is more game than literary game, there are those pieces where language remains essential. All the Delicate Duplicates, the latest brainchild of Mez Breeze and Andy Campbell, is a superlative example of the latter, and thus a serious rebuke of Gallix’s assertion.

Electronic literature can be a lot of things — literary games, hypertexts, interactive fiction, generative poetry, bots — but it is always more than the product of digitization; ebooks, which merely mimic print on a screen, typically don’t count. E-lit relies on computational affordances for creative expression, privileging language within a constellation of modalities. Still, resistance to its charms endures.

Responding to Gallix’s provocation in a piece published in the Electronic Book Review, Dene Grigar*, current president of the Electronic Literature Organization, points to those barriers that have marginalized e-lit in classrooms and popular culture, arguing that resistance to the form emanates from “deeply-held views of the proper relationship between humans and machines, of what constitutes the good, the beautiful and the true, and of the nature of art.” (…)

(…) But the achievements of Duplicates are not just contextual. If Breeze and Campbell are to be commended for any aspect of their ambition, it should be for their efforts to juxtapose the literary and the digital in a manner that genuinely advances the field and forcefully responds to naysayers such as Gallix that, no, electronic literature is not dead, it is everywhere, it is thriving, and it is literary. Ten years ago, the future of electronic literature was legitimately being questioned. Ten years from now, I expect that we will be reflecting on the present moment as that which saw the form truly begin to build on the work of its pathfinders — to borrow from Grigar and Moulthrop — and progress toward its potential, both as an aesthetic experience and as an act of expression capable of permeating the public consciousness. There is little doubt that such reflection will place much focus on the work of Mez Breeze and Andy Campbell, the pathfinders of their day.

[* She accused me at the time of misquoting her in my Guardian piece, which is absolutely not true. I quoted her verbatim, and — sensing that what she had written might be misconstrued by some of her colleagues — had even gone to the trouble to double-check that I had permission to quote anything from the email in which she had answered my questions.]