“Today, nostalgia is almost as unacceptable as racism. Our politicians speak of drawing a line under the past and turning our back on ancient quarrels. In this way, we can leap forward into a scrubbed, blank, amnesiac future. If [Walter] Benjamin rejected this kind of philistinism, it was because he was aware that the past holds vital resources for the renewal of the present. Those who wipe out the past are in danger of abolishing the future as well. Nobody was more intent on eradicating the past than the Nazis, who would, like the Stalinists, simply scrub from historical record whatever they found inconvenient.”
– Terry Eagleton, “Waking the Dead,” New Statesman 12 November 2009

Beckett with a Smiley Face 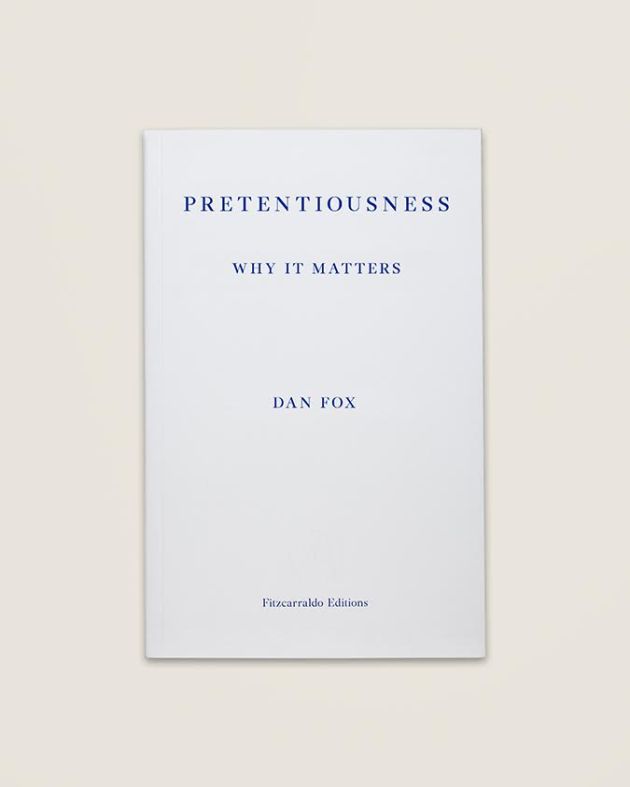 Dan Fox’s Pretentiousness: Why It Matters is as provocative and witty as its title. Taking his cue from Brian Eno (whose career he describes as “a successful experiment in pretension”), Fox, an art critic, sets about reclaiming the P-word. Indeed, the whole book is a gloss on Eno’s contention that “pretending is the most important thing we do” because it enables us to discover “what it would be like to be otherwise”. It is a self-help manual for those, brought up on David Bowie, who doubt that there is a self to help.

More often than not, the accusation of pretentiousness is levelled at people who get ideas above their station. It cuts them down to size. Fox turns this on its head by celebrating the aspiration to a life less ordinary. In the current cultural climate, it is downright subversive.

The author’s subject is the slippage from pretending — what is done at the kids’ table – to pretension, which “goes on over the wine and cheese course with the grown-ups”. How does an activity that is considered crucial to the healthy development of children become contemptible in adults? In a “back-of-an-envelope history of acting”, Fox asks where this stigma originates, exploring Plato’s mistrust of actors but also the adoption of classical rhetoric by politicians and lawyers, whereby the “history of pretence” became bound up with the “history of power”. Finally, the evolution towards a naturalistic style of acting accompanied the rise of individualism and the Romantic quest for “the truth of one’s inner self”. Pretending was now beyond the pale.

Authenticity raises the issue of authentication — the “legitimacy we confer, or not, on a performance”. It is “a matter of authority, of who gets to pass judgement on whether or not you are ‘being yourself'”. Fox notes that the modern artist’s mission is to seek “creative freedom” but fails to point out that this autonomy can also be the source of his or her lack of legitimacy. He describes the “gap between expectation and actuality” – which derives from this creative freedom — as “a productive necessity rather than a flaw”. Failure is the process “by which the arts move forward”. This is Beckett with a smiley face.

The rest of Fox’s argument covers class: accents, politics, gentrification and inverted snobbery. Unlike pretending, pretension “carries with it the sting of class betrayal, especially in the UK, where class is a neurosis as much as a set of social conditions”. The accusation of pretentiousness is “a form of social control”, designed to keep people in their place and protect the status quo.

Pretentiousness achieves a pleasing congruence between style and substance. After all, the essay – experimental by definition, not content with being itself – is arguably the most pretentious genre still in currency. Dan Fox’s shape-shifting work displays many of its hallmarks. It opens with a few etymological considerations and then unfolds organically, one idea leading to another, exemplifying Brian Dillon’s description of the essay as “a way of writing oneself into the unknown”.

There are downsides to this narrative drift. The author’s ruminations lead him, on occasion, to retread ground. In certain passages, the book feels freighted with too many examples. On the other hand, discussing the notion of authenticity without mentioning Kierkegaard or Heidegger seems remiss (although that probably says more about my pedantry than any shortcomings on the author’s part).

Nonetheless, the breadth of reference is staggering — taking in history, cinema, drama, politics, literature, sociology and music. It reflects the “magpie cultural education” that “pop’s intellectual permissiveness” once provided. Without giving in to nostalgia, Fox harks back to more progressive times when culture was not the preserve of the privileged. From this vantage point, his essay ties in with the writings of Mark Fisher (whom he quotes), Owen Hatherley and Simon Reynolds.

The final, autobiographical chapter is the strongest and most moving. It charts the author’s journey from Wheatley, a village in Oxfordshire where he grew up in the late 1980s, to New York City, where he now co-edits the contemporary art magazine frieze. It is a celebration of overreaching ambition; a paean to “dreaming big in small cities” at a point when pop music (which “never asked anyone for permission to be pretentious”) acted as a gateway to a wider world of culture. Music connects the young author to Manhattan and Berlin, even though he has “barely been an hour down the motorway to London”. On day trips to Oxford, he feels the presence of Andy Warhol in a student’s striped T-shirt or Nico in a local branch of Chelsea Girl.

Fox ends by fast-forwarding to his present life in New York. Near his apartment, there is “an Essex Street, a Ludlow Street, a Norfolk Street, and a Suffolk Street”. He wonders what these British toponyms would have conjured up, had he grown up “on the Lower East Side rather than in the English countryside”. Having read this book in Paris, I find myself longing for Wheatley. Life, as Rimbaud never quite said, is elsewhere.

In Fox’s interpretation, pretentiousness is culturally — rather than socially — aspirational. It is “permission for the imagination”, allowing us to transfigure our mundane surroundings and soar above what Keats called “busy common-sense”.

On 8 March 2016, this review was posted on the New Statesman‘s website under the title “When Did Pretentiousness Become Such a Dirty Word?”

It was prefaced thus: Dan Fox’s new book sets out to reclaim the P-word with an impressively broad-ranging study of art, literature and culture.