Paul Gorman’s The Story of “The Face” charts the rise and fall of the original style magazine, from its launch, on a shoestring, in 1980, to 1999, when it was sold off by its founder to a publishing giant. Nick Logan’s monthly would only survive five more years in the brave new digital world it had foreshadowed with its kaleidoscopic cultural coverage. Right from the start, The Face proved a victim of its own success. Having identified style as the prism through which to observe the zeitgeist — thereby eliding the distinction between men and women’s magazines — it soon spawned a host of imitators, not least among the Sunday supplements. At one stage, art director Neville Brody was producing a brand new typeface for every issue, in a frenetic bid to remain one step beyond.

This coffee-table book, with its hundreds of lavishly reproduced covers and innovative page layouts, does full justice to the “world’s best-dressed magazine”. Flicking through it, one witnesses The Face’s visual identity gradually shifting away from radical graphic design towards slick era-defining photography. The Story of The Face is a paean to its founder who, the author contends, has been airbrushed out of history. Logan’s fascination with the intersection between pop music and street style was rooted in his days as a young mod in the 1960s, which the title of his prime publication would allude to (a face being a top mod). After working for the local press, he graduated to the New Musical Express where he became editor at the age of twenty-six, in 1973, presiding over what was arguably the paper’s most important period. He left, following a breakdown, subsequently launching the hugely successful Smash Hits aimed at the post-punk teenybopper market.

The Face was ahead of its time, but also very much of it. The inaugural issue was even delayed by a printers’ strike. Although he knew that the Two Tone phenomenon had already peaked, Logan insisted on putting a picture of The Specials’ Jerry Dammers on the cover as the band typified the marriage of street style and popular music he intended to explore. In a landmark piece published a couple of years later, Robert Elms observed that youth culture now represented “not a rebellion but a tradition” — one, he may have sensed, that was drawing to a close. The days of the austerity dandies who, devoid of job or future, fashioned themselves into extravagant works of art, were numbered. Never again would style have so much substance. The Face chronicled the end of an era as much as it ushered in a new one, endowing its early strapline — “rock’s final frontier” — with a presciently valedictory tone. 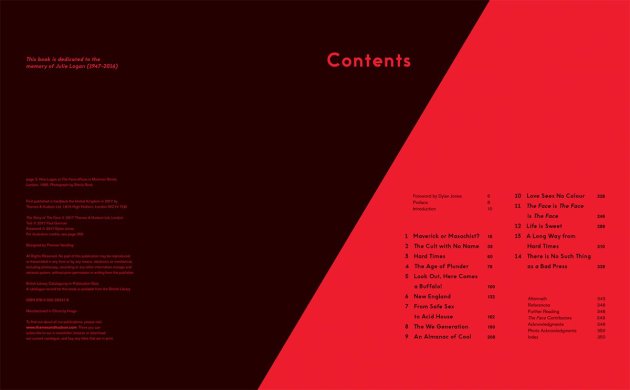 The first sub-culture to subvert the patch was the hippies in the 1960s, whose patchwork clothes were laden with references to ethnic styles. However, it was the punks who really made it their own. As writer Andrew Gallix puts it, “The evolution of punk fashion was the doomed quest for authenticity” — hence why their bold DIY-aesthetic was opposed to all things conventional.