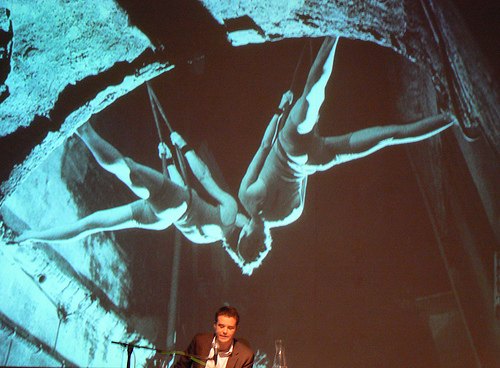 Let’s not beat about the bush: Tom McCarthy’s third novel, C, is a masterpiece: a sprawling associative web that keeps generating new meanings as though of its own volition. “That’s the beautiful thing about what literature does to language,” says McCarthy. “You stick these slippery terms in and they start cross-fertilising in ways you never anticipated — incestuous ways.” C takes us from a fairytale English silk farm to spy-ridden Egypt by way of a central European spa town, aerial warfare and a coke-fuelled London filled with bright young Amazons. It is a comedy of errors, a gothic mystery, a boy’s own story; a traditional 19th-century novel seemingly rewritten by Burroughs or Ballard. You’ll find geometry, technology and trauma. Loops, repetitions and mutations. Incest, insects and radio bugs. And phantom words emanating from subterranean worlds half-glimpsed “at the dial’s far end”. Tune in…

DAZED & CONFUSED: C could be seen as a futurist novel. Serge, the protagonist, even seems to be partly modelled on Marinetti himself…
TOM MCCARTHY: I love Marinetti, and, yes, he’s part of Serge’s make-up, particularly in the war section. But Serge is equally a mixture of Freud’s Wolf Man, the beautifully fucked-up melancholic eternally grieving for his dead sister; and Alexander Bell, inventor of the phone (who also lost two siblings); and Howard Carter, the Egyptologist who disinterred the ur-family tomb; and a bunch of other people. I’m interested in the places where technology and mourning intersect.

There’s also a strong retro-futurist — even steampunk — element to C. Did you feel the need to revisit the early 20th century in order to reinvent the future of the novel?
Yes. Walter Benjamin says that the angel of history faces backwards. I think it’s the same for literature: you’ve got to look back in order to move forwards. It’s not just the foundations of contemporary technology that are being laid in the early 20th century (the code radio bugs used exactly anticipated text speak, just as lots of their output anticipated Twitter), but also literature’s period of high modernism that’s coming to a head. Not for nothing does the novel end in 1922: it’s the year that Ulysses and The Waste Land came out. The task for the contemporary writer (sadly, one which many writers of today are shirking) is to work through that period’s legacy — dynamically and radically, but attentively too.

All the major themes in C — from wireless technology to the discovery of Tutankhamun — come from your early experiments with the International Necronautical Society (INS), don’t they?
I had the idea for C while I was working on the INS project at the ICA. There, we had a radio station modelled on the illicit one in Jean Cocteau’s film Orphée (where the person transmitting is already dead), sending out all these coded poetic messages. I was looking at writing around encryption, and the concept of the ‘crypt’ that you get in psychoanalysis and philosophy.

Incest lies at the heart of C: this, for you, is the source code of western literature, right?
Yes. You go back from Nabokov through Faulkner through Racine right back to Sophocles, and incest is the central theme that keeps recurring. For Freud, the incest prohibition is what makes us civilised, socialised, even human, so that’s the taboo all tragic heroes, who are fundamentally doomed rebels, are most drawn towards transgressing.

Why do you think that all new means of telecommunication are linked to death, mourning and melancholia?
I don’t know if I can explain it. It’s just a pattern that keeps recurring. For every comm-tech invention, there seems to be a dead sibling somewhere. Bell even made a pact with his brother that, if one of them died like their other brother had, the surviving one would invent a device capable of receiving messages from the dead. Then the second brother dies, and Bell invents the telephone. He remained a rationalist, a sceptic — basically because his brothers never called. But the desire, the fantasy, is there in the technology: a ghost in the machine. It’s the same with radio. Seances in the 20s weren’t about spirit and ectoplasm any more: they were about “tuning in” to voices resonating on high frequencies, like radio waves. With the internet, it seems to be more about a presence than an absence: everything’s there, every click and keystroke ever made eternally retrievable, a giant archive. That’s a kind of haunting too, though.