Hauntology: A Not-So-New Critical Manifestation
The new vogue in literary theory is shot through with earlier ideas 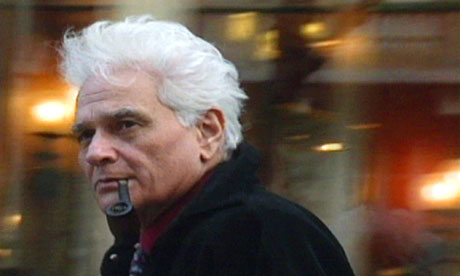 [Haunting presence … Jacques Derrida, who coined the term hauntology, in a still from the documentary Derrida]

Hauntology is probably the first major trend in critical theory to have flourished online. In October 2006, Mark Fisher — aka k-punk — described it as “the closest thing we have to a movement, a zeitgeist”. A mere three years later, Adam Harper prefaced a piece on the subject with the following caveat: “I’m all too aware that it’s no longer 2006, the year to blog about hauntology”. Two months ago, James Bridle predicted that the concept was “about six months away from becoming the title of a column in a Sunday supplement magazine”. Only four months to go, then. My hunch is that hauntology is already haunting itself. The revival starts here.

Like its close relative psychogeography, hauntology originated in France but struck a chord on this side of the Channel. In Spectres of Marx (1993), where it first appeared, Jacques Derrida argued that Marxism would haunt Western society from beyond the grave. In the original French, “hauntology” sounds almost identical to “ontology”, a concept it haunts by replacing — in the words of Colin Davis — “the priority of being and presence with the figure of the ghost as that which is neither present, nor absent, neither dead nor alive”.

Today, hauntology inspires many fields of investigation, from the visual arts to philosophy through electronic music, politics, fiction and literary criticism. At its most basic level, it ties in with the popularity of faux-vintage photography, abandoned spaces and TV series like Life on Mars. Mark Fisher — whose forthcoming Ghosts of My Life (Zer0 Books) focuses primarily on hauntology as the manifestation of a specific “cultural moment” — acknowledges that “There’s a hauntological dimension to many different aspects of culture; in fact, in Moses and Monotheism, Freud practically argues that society as such is founded on a hauntological basis: the voice of the dead father”. When you come to think of it, all forms of representation are ghostly. Works of art are haunted, not only by the ideal forms of which they are imperfect instantiations, but also by what escapes representation. See, for instance, Borges‘s longing to capture in verse the “other tiger, that which is not in verse”. Or Maurice Blanchot, who outlines what could be described as a hauntological take on literature as “the eternal torment of our language, when its longing turns back toward what it always misses“. Julian Wolfreys argues in Victorian Hauntings (2002) that “to tell a story is always to invoke ghosts, to open a space through which something other returns” so that “all stories are, more or less, ghost stories” and all fiction is, more or less, hauntological. The best novels, according to Gabriel Josipovici, share a “sense of density of other worlds suggested but lying beyond words“. For the reader or critic, the mystery of literature is the opacity — the irreducible remainder — at the heart of writing that can never be completely interpreted away. The whole western literary tradition itself is founded on the notion of posterity, which Paul Eluard described as the “harsh desire to endure” through one’s works. And then, of course, there’s the death of the author… All this, as you can see, could go on for quite a while, so perhaps we should wonder if the concept does not just mean all things to all (wo)men. Steen Christiansen, who is writing a book on the subject, explains that “hauntology bleeds into the fields of postmodernism, metafiction and retro-futurism and that there is no clear distinction — that would go against the tension which hauntology aims at”.

As a reflection of the zeitgeist, hauntology is, above all, the product of a time which is seriously “out of joint” (Hamlet is one of Derrida’s crucial points of reference in Spectres of Marx). There is a prevailing sense among hauntologists that culture has lost its momentum and that we are all stuck at the “end of history“. Meanwhile, new technologies are dislocating more traditional notions of time and place. Smartphones, for instance, encourage us never to fully commit to the here and now, fostering a ghostly presence-absence. Internet time (which is increasingly replacing clock time) results in a kind of “non-time” that goes hand in hand with Marc Augé’s non-places. Perhaps even more crucially, the web has brought about a “crisis of overavailability” that, in effect, signifies the “loss of loss itself”: nothing dies any more, everything “comes back on YouTube or as a box set retrospective” like the looping, repetitive time of trauma (Fisher). This is why “retromania” has reached fever pitch in recent years, as Simon Reynolds demonstrates in his new book — a methodical dissection of “pop culture’s addiction to its own past”.

Hauntology is not just a symptom of the times, though: it is itself haunted by a nostalgia for all our lost futures. “So what would it mean, then, to look for the future’s remnants?” asks Owen Hatherley at the beginning of Militant Modernism, “Can we, should we, try and excavate utopia?” It might just be worth a shot.