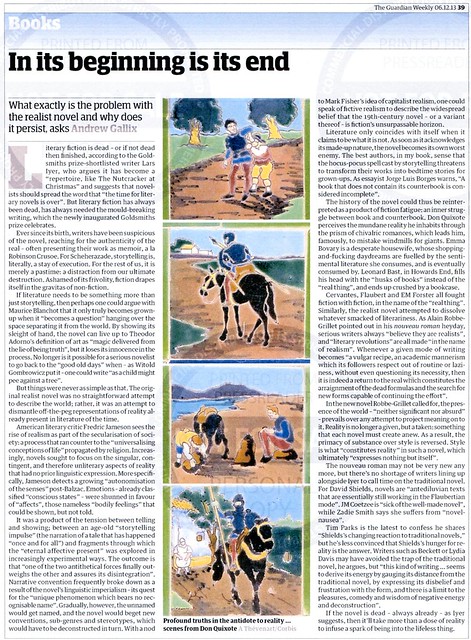 What exactly is the problem with the realist novel and why does it persist, asks Andrew Gallix

Literary fiction is dead — or if not dead then finished, according to the Goldsmiths prize-shortlisted writer Lars Iyer, who argues it has become a “repertoire, like The Nutcracker at Christmas” and suggests that novelists should spread the word that “the time for literary novels is over“. But literary fiction has always been dead, has always needed the mould-breaking writing which the Goldsmiths prize celebrates.

Ever since its birth, writers have been suspicious of the novel, reaching for the authenticity of the real — often presenting their work as memoir, à la Robinson Crusoe. For Scheherazade, storytelling is, literally, a stay of execution. For the rest of us, it is merely a pastime; a distraction from our ultimate destruction. Ashamed of its frivolity, fiction drapes itself in the gravitas of non-fiction.

If literature needs to be something more than just storytelling, then perhaps one could argue with Maurice Blanchot that it only truly becomes grown-up when it “becomes a question” hanging over the space separating it from the world. By showing its sleight of hand, the novel can live up to Adorno’s definition of art as “magic delivered from the lie of being truth“, but it loses its innocence in the process. No longer is it possible for a serious novelist to go back to the “good old days” when — as Gombrowicz put it — one could write “as a child might pee against a tree“.

But things were never as simple as that. The original realist novel was no straightforward attempt to describe the world; rather, an attempt to dismantle off-the-peg representations of reality already present in literature of the time.

American literary critic Fredric Jameson sees the rise of realism as part of the secularisation of society; a process that ran counter to the “universalising conceptions of life” propagated by religion. Increasingly, novels sought to focus on the singular, contingent, and therefore unliterary aspects of reality that had no prior linguistic expression. More specifically, Jameson detects a growing “autonomisation of the senses” post-Balzac. Emotions — already classified “conscious states” — were shunned in favour of “affects”, those nameless “bodily feelings” that could be shown, but not told.

It was a product of the tension between telling and showing; between an age-old “storytelling impulse” (the narration of a tale that has happened “once and for all”) and fragments through which the “eternal affective present” was explored in increasingly experimental ways. The outcome is that “one of the two antithetical forces finally outweighs the other and assures its disintegration”. Narrative convention frequently broke down as a result of the novel’s linguistic imperialism — its quest for the “unique phenomenon which bears no recognisable name”. Gradually, however, the unnamed would get named, and the novel would beget new conventions, sub-genres, and stereotypes, which would have to be deconstructed in turn. With a nod to Mark Fisher‘s idea of capitalist realism, one could speak of fictive realism to describe the widespread belief that the 19th-century novel — or a variant thereof — is fiction’s unsurpassable horizon.

Literature only coincides with itself when it claims to be what it is not. As soon as it acknowledges its made-up nature, the novel becomes its own worst enemy. The best authors, in my book, sense that the hocus-pocus spell cast by storytelling threatens to transform their works into bedtime stories for grown-ups. As essayist Jorge Luis Borges warns, “A book that does not contain its counterbook is considered incomplete”.

The history of the novel could thus be reinterpreted as a product of fiction fatigue: an inner struggle between book and counterbook. Don Quixote perceives the mundane reality he inhabits through the prism of chivalric romances, which leads him, famously, to mistake windmills for giants. Emma Bovary is a desperate housewife, whose shopping-and-fucking daydreams are fuelled by the sentimental literature she consumes, and is eventually consumed by. Leonard Bast, in Howards End, fills his head with the “husks of books” instead of the “real thing”, and ends up crushed by a bookcase.

Cervantes, Flaubert, and EM Forster all fought fiction with fiction, in the name of the “real thing”. Similarly, the realist novel attempted to dissolve whatever smacked of literariness. As Alain Robbe-Grillet pointed out in his nouveau roman heyday, serious writers always “believe they are realists”, and “literary revolutions” are all made “in the name of realism”. Whenever a given mode of writing becomes “a vulgar recipe, an academic mannerism which its followers respect out of routine or laziness, without even questioning its necessity, then it is indeed a return to the real which constitutes the arraignment of the dead formulas and the search for new forms capable of continuing the effort”.

In the new novel Robbe-Grillet called for, the presence of the world — “neither significant nor absurd” — prevails over any attempt to project meaning on to it. Reality is no longer a given, but a taken: something that each novel must create anew. As a result, the primacy of substance over style is reversed. Style is what “constitutes reality” in such a novel, which ultimately “expresses nothing but itself”.

The nouveau roman may not be very new any more, but there’s no shortage of writers lining up alongside Iyer to call time on the traditional novel. For David Shields, novels are “antediluvian texts that are essentially still working in the Flaubertian mode”. JM Coetzee is “sick of the well-made novel”, while Zadie Smith says she suffers from “novel-nausea”.

Tim Parks is the latest to confess he shares “Shields’s changing reaction to traditional novels,” but he’s less convinced that Shields’s hunger for reality is the answer. Writers such as Beckett or Lydia Davis may have avoided the trap of the traditional novel, he argues, but “this kind of writing…seems to derive its energy by gauging its distance from the traditional novel, by expressing its disbelief and frustration with the form, and there is a limit to the pleasures, comedy and wisdom of negative energy and deconstruction”.

If the novel is dead — always already — as Iyer suggests, then it’ll take more than a dose of reality to infuse a spark of being into the lifeless thing lying at our feet.