JH: Thank you for taking the time to answer my questions.

JH: My primary interest is in New Media and what some refer to as New Media Literature. In addition there seems to be resurgence in writing and poetry. Perhaps this is due to so many on-line outlets. Also, movements such as the Brutalist and Offbeat Generation owe their existence to the Internet and various on-line outlets, including 3:AM. I think some of these movements and/or on-line journals have sprung from some post-punk anarchy reaction against mainstream publishing. I’ve read as much and agree with it. Some of these questions may seem obvious, but I am sure others are curious, as am I, to your unique perspective.

What is the importance of a movement or school of work? Is it an idea or concept developed from a historical perspective or can it be witnessed in the present, as it emerges?

AG: We never sat down one day and said ‘Let’s launch a new literary movement!’. We sat down one day and realised that we were part of a movement. It was already there, and all it needed was a name to gain visibility. It was the Emperor’s New Clothes in reverse. So, to answer your question, we have been observing the development of the Offbeat phenomenon since 2005 when we became conscious of it.

JH: What can a writer gain, if anything, from the inclusion within a movement?

AG: First of all, I must make it quite clear that the Offbeats are a movement and not a school of writing. Offbeat writers are individuals — they all have different styles and influences, even though they all share certain values and a certain rebellious spirit. Writing is a solitary activity, so it feels good to also have that collective experience.

JH: What are the unifying characteristics of the Brutalists or Offbeats? What is their historical heritage?

AG: The Brutalists are not a movement; they’re a trio of writers (Adelle Stripe, Ben Myers, and Tony O’Neill) who sometimes come together to write under that banner. Instead of forming a band, they write poetry. The Brutalists are very much part of the Offbeat scene. What unites all the Offbeats is a rejection of a publishing industry increasingly dominated by marketing, rather than literary, concerns. The name ‘Offbeat’ is an obvious nod to the Beats, but punk is perhaps the biggest historical reference. At least for some of us.

JH: In a few interviews I have read, the Offbeat Generation does not exist within a single style or genre, I am curious what the literary influences have been to this group? And, more specifically, any influences from areas outside of writing?

AG: That’s quite right, and since there is no house style, influences are pretty diverse. There’s the Bukowski-John Fante Real McCoy school of writing embodied by Tony O’Neill. There’s the Maurice Blanchot-Francis Ponge-William Burroughs axis led by Tom McCarthy. There’s the Barthelmesque comic postmodernism of HP Tinker. There’s the more quirky Brautigan-tinged world of Chris Killen or Tao Lin. And then there’s all the others with their personal influences.
Music is indeed very important to many Offbeats. Tony O’Neill played in bands like Kenickie or the Brian Jonestown Massacre. Ben Myers is also a music journalist and he even used to have his own indie label. Will Ashon has a hip hop label. As far as I’m concerned, Howard Devoto’s early lyrics are right up there with the works of the greatest writers.

JH: As the Beats of the 50s/60s gained popularity, pop culture turned them into a caricature of their origins. Is there a fear that current movements could be mainstreamed and, potentially, lose their power as a dissenting voice?

AG: Definitely. In a way, it’s already happened. There are lots of young writers who think they’re being Offbeat by spouting clichés about sex and drugs.

JH: What is the goal of a movement? Is it collective? Or individualistic?

JH: It is my opinion that America’s “disposable mentality” has migrated to literature and our literary tradition. Publishers rely on a bestseller to support their efforts with other books. In my opinion, a majority of these best sellers are total shit. Writers that repeatedly appear on best-sellers’ lists utilize formula and structure that will satisfy the widest possible audience, with lim-ited concern for craft, exploration and daring. Subsequently, the wider audience is “dumbed down.” Additionally, marketing departments focus a majority of their budgets on bestsellers thereby limiting marketing funds for up and coming writers. In short, big publishers continue to promote disposable writing in order to earn the quick buck. Does literature still exist, either via New Media or traditional outlets? What is the future of literature?

AG: I totally agree with your analysis of the state of things. It’s the same in Britain — perhaps even worse because of the presence of a huge middlebrow market. In the States, it’s either total shit or pure genius.
But, yes, literature still exists and will continue to exist. I can’t predict what its future will be, but I think the western notion of The Writer may be on the way out. I think there will be fewer career writers in the future: writers who write simply because that’s what writers do. People will write a novel when they really feel the need to do so, but will also have other creative outlets.

JH: Returning to New Media, how important are New Media platforms (blogs, social networks, YouTube, etc.) to writers? Is there such a thing as New Media Literature?

AG: Well, I think you need to make a distinction between e-literature which uses the Internet as a new medium, and most online creative writing which simply uses the web as a medium. As I wrote here, I get the impression that the future of e-literature is to merge into digital art. That view seems to be highly controversial in e-lit circles. As for webzines, blogs etc. I think their role has been essential. The Offbeat movement is the first literary movement of the digital age. Without the Internet, it probably wouldn’t have existed in the first place.

JH: 3:AM is a widely admired online journal and has been around a while now. I have always been impressed with the quality of writing that comes out of it. With the Internet providing a global platform and on-line outlets (websites, blogzines, etc.) is there a dilution of quality writing? Or, more specifically, is there too much content? Or, perhaps, is it just too easy to get published online?

AG: Thanks for the kind words.
Interesting questions. A band that releases an album on its own label has credibility. Writers who do that are accused of vanity publishing. It’s true that there are thousands of rubbish writers out there who publish themselves on the Internet, but there are also stacks of rubbish writers whose works are published by big concerns — just visit any bookshop to see what I’m talking about. Bad writers will give up eventually; the good ones will float to the surface.

JH: How important is marketing to a New Media outlet or, as a whole, “underground” writers and publishers? With my journal I market wholly to exposure the writers I admire and feel have talent. The only real cost is time. With the press, I have a different attitude. I want to promote the writer, but I want to have some profit, no matter how minimal, in order to publish more writers. In the age of New Media Literature and the expectation of everything on the Internet should be free or relatively inexpensive, how does a press survive?

AG: I’ve been editing 3:AM Magazine since 2000; we get thousands of unique visitors a day, and yet I’ve never made any money out of it. There’s very little money in serious fiction.

JH: Is it more important to publish than publish and profit?

JH: Okay, enough of my bullshit, let’s focus on 3:AM. Would 3:AM exist without the Internet?

AG: An emphatic no. I’d been toying with the idea of a post-punk literary journal for years, but the logistics just made it virtually impossible.

JH: In researching this project I have read through a number of issues from 3:AM. In terms of quality and content, it is definitely one of the better online magazines available. You have had a long tenure on the Internet, longer than most. What do you attribute that to?

AG: To the fact that we’re genuinely interested in writing, and that we don’t expect to make any money out of it.

JH: What are the future goals of 3:AM?

AG: To continue to spread the word.

… O’Neill built a strong reputation for his needles-and-all accounts of addiction by publishing his stories online, on sites like 3:AM Magazine. This led him to be grouped with a range of other writers — such as Ben Myers, Lee Rourke, Adelle Stripe, and Andrew Gallix — who were collectively branded “The Offbeat Generation” by The Guardian. 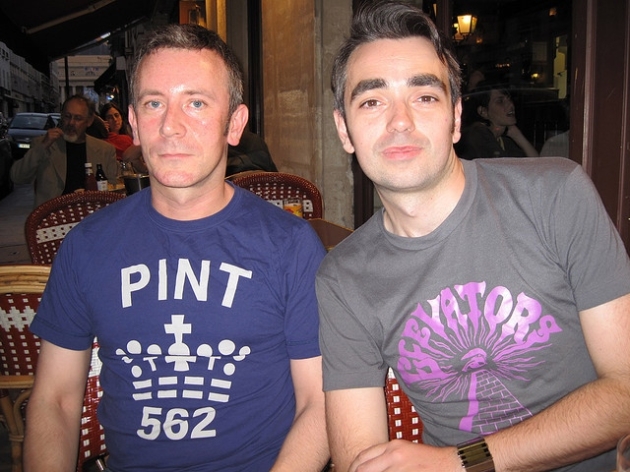 Inés Martin Rodrigo has published an in-depth article on the Offbeats in top Spanish daily ABC in which I — “el Rimbaud de la Red”! — am quoted at length: