In 2011 Andrew Gallix, in the Guardian, wrote a piece on unread difficult books, and he mentioned “an anthology of blank books [edited by Michael Gibbs] entitled All Or Nothing.” We can consider Blank as continuing that line. Kenneth Goldsmith’s prefatory essay “Why Conceptual Writing? Why Now?” in Against Expression: An Anthology of Conceptual Writing (2011) contains these useful lines: “What has happened in the past fifteen years has forced writers to conceive of language in ways unthinkable just a short time ago. With an unprecedented onslaught of the sheer quantity of language . . . , the writer faces the challenge of exactly how best to respond.” In volume one of his trilogy, Schneiderman edged near to muteness, but in [SIC] he has positioned himself, the work, and us in a new spot. His latest book is filled with words. None of them are his.

In the end, I want to write a book that is the thing itself. That is the ambition, of course.

Did you keep diaries when you were young?

Yes, I did, but I burned them when I was twenty-five or twenty-six.

I was so embarrassed, I couldn’t stand it. It’s the same with Min Kamp, I can’t stand it. If I could I would burn that, too, but there are too many prints, so it’s impossible.

Life develops, changes, is in motion. The forms of literature are not. So if you want the writing to be as close to life as possible — I do not mean this in any way as an apology for realism — but if you want to write close to life, you have to break the forms you’ve used, which means that you constantly have the feeling of writing the first novel, for the first time, which means that you do not know how to write. All good writers have that in common, they do not know how to write.

C. D. Rose‘s The Biographical Dictionary of Literary Literature (Melville House), with an introduction by yours truly, will be published on 4 November 2014. 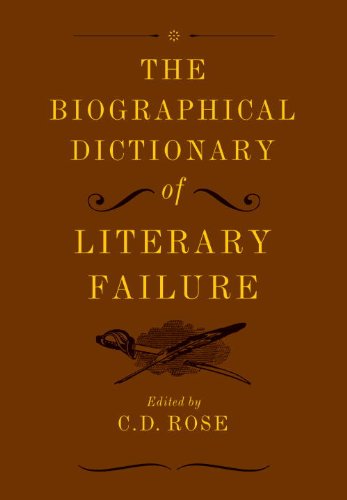 “I reserve the right to leave everything a little ragged, as if it (“everything”) knows better than I do how to be a book. If I tuck in all the corners, make it too tidy, it strains for perfection without allowing for the real perfection of the irreducible. I’m not saying I achieved that. But one must have goals.”
– Rachel Kushner, “A Psychotic Pattern of No-Pattern: A Conversation with Rachel Kushner,” Interview by Dana Spiotta, Tin House 59 (2014)

For, in a sense, the capacity to fail is much more important than any individual human achievements: It is that which makes them possible.

Maurice Blanchot, “The Disappearance of Literature,” The Book to Come

Whoever asserts literature in itself asserts nothing. Whoever looks for it looks for only what is concealed; whoever finds it finds only what is on this side of literature or, what is worse, beyond it. That is why, finally, it is non-literature that each book pursues as the essence of what it loves and wants passionately to discover.

A writer is in hell when her reader forgets her. This is the problem of Beatrice. Beatrice existed infinitely for Dante but he hardly if at all for her. Here’s the nub for Borges and his prodigious minimalism: we should stop thinking a ten minute conversation with Roberto Bolano would reveal to us the true meaning of 2666. And never doubt that our greatest love hardly acknowledges us. Andrew Gallix’s strange and Roman miniature is probably a Florentine exile; his ‘Fifty Shades of Grey Matter’ engulfs this type of inutterable despair. Yet still, whatever is imagined is there. If this is likened to a journey then it ends in a catastrophe which is not destiny but its secret instruction.

I thought of it as an attack, but not in any straightforward, upfront ‘I’ll show you my fists’ man sort of thing. It was just an attempt to step sideways and shadow-box with a few phantoms.

David Winters, “Like Sugar Dissolving: On The End of the Story by Lydia Davis,” The Quarterly Conversation 35 (March 2014)

… In The End of the Story, and arguably across Davis’ stories more broadly, the composition of a fictional form coincides, at all times, with the preservation of “something not formed.” After all, any closed circle’s circumference still opens up a continuous curve. Closure and openness, answers and questions, fixity and infinity: to these unsettled oppositions we could also add the “written” and its counterpart, the “unwritten.” Thus, the novel that Davis’ narrator writes is itself encircled, like any novel, by a halo of hypothetical, unfinished books. In this way, the written work retains an internal relation to an idealized, unwritten other:

I’m afraid I may realize after the novel is finished that what actually made me want to write it was something different, and that it should have taken a different direction. But by then I will not be able to go back and change it, so the novel will remain what it is and the other novel, the one that should have been written, will never be written.

Late in his life, in a series of lectures inspired by his own unwritten novel, Roland Barthes examined Mallarmé’s distinction between the “Album” and the “Book.” The Book, argued Barthes, aspires to perfection — it aims to provide an accurate “representation of the universe, homologous to the world.” To create such an artwork would be to reflect “the totality of reality and history, from the perspective of transcendence.” The Album, by contrast, remains rooted within reality, rather than striving to stand outside it. The world as rendered by the Album is incomplete and chaotic; “not-one, not-ordered, scattered, a pure interweaving of contingencies, with no transcendence.” Needless to say, neither Barthes nor Mallarmé crudely confuses these two entities with actual literary texts. The binary is not taxonomical but conceptual; the push and pull between these two poles shapes the production of literary works. On the one hand, the Album and all its manifestations: the fragment, the essay, the unfinished effort. On the other, the Book and its corollaries: the summa, the opus, the completed oeuvre.